On June 29 Pat and Ken on Polar Mist 49VT08  and Bill and Macy on Lady 37VT08 met in Montague Harbour on Galiano Island, BC, Canada.  We were looking forward to heading north through the American San Juan Island and Canadian Gulf Islands, across the Strait of Georgia, through Desolation Sound and up into the Broughton Archipelago, a group of islands between the west coast of mainland Canada and Vancouver Island.  It is a cruising paradise- mountains dropping into the water, beautiful bays, few settlements, a couple of towns, and a handful of marinas.  It was Macy’s and Bill’s third trip up there and just another one of many for Ken and Pat, but we were ready for the adventure.

For northwest boaters all the places north – the Islands and especially Desolation Sound are very popular, and anchorages are filled with boats during the summer.  The Broughtons are less crowded probably because you need to go through 5 tidal rapids to get there, plus it is a lot further north.  The rapids are pretty much non-events if you time going through at slack or near slack.  The first three rapids are done together with the timing based on slack at Dent Rapids which can be the most turbulent.  Going north this trip we went through the first three and then waited a couple of hours and took the other two rapids later in the day near the next slack.

What were the highlights of the trip?  For Pat and Ken, who usually cruise up in the Broughtons in the fall, it was seeing the area when marinas, restaurants and places are open.  They were surprised that it was not too crowded and that you could still anchor and feel alone with nature.  They did get to a couple of new places.  Of course, having Lady rafted alongside most places was new too.  Ken said it was like cruising on an 86 foot boat with 15 foot beam or a 49 with a 30 foot beam with a crew fixing dinner and cleaning up every other day.  For several years, we have called Polar Mist “the mother ship” but this trip she proved it, providing water, food and laundry services on a few occasions!

For Bill and Macy, the highlights were going into many new places – our favorites were: Tribune Bay on Hornby Island, Booker Lagoon where we had to go in at slack and were treated to a black bear walking the beach the next morning; Lady Boot Cove; Crease Island Nook (a new one for Ken and Pat); Waddington Bay, and Shoal Bay with the best view of all.  We also checked out several more anchorages for a possible future visit.

Fortunately we also got to do what tugs are supposed to do: towing distressed vessels.  When entering Joe Cove on Eden Island, Ken met Paul Nattall from Garden Bay, BC and Bob Morris from Gibsons, BC on Paul’s sailboat that had lost itsengine fresh water pump, a couple of days before.  They were getting ready to send one off in the dinghy 10 miles or so to Echo Bay.  We prepared to take them in tow the next morning.  After several attempts to get Polar Mist over where they were anchored, Ken decided there were too many shallow spots and rocks.  So Bill took our dinghy and pulled them out to deeper water.   Ken then took them alongside and we all headed for Pierre’s Marina at Echo Bay.  After an easy passage, Paul invited us to stay for one of Pierre’s special event dinners - prime rib.  Fortunately the parts were ordered and Pierre picked them up at Port McNeil the next day..  Via email, we know they got everything working and made it home. 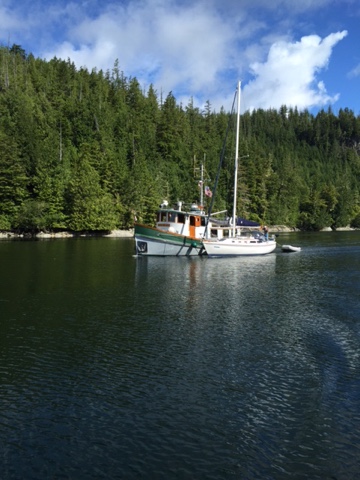 Finally, when heading home, we stopped at Roscoe Bay in Desolation Sound – a lovely anchorage with 30 plus boats already anchored.  Here we could only go in at high water over a drying bar.  LADY went first with Bill calling out water depthsto Ken on POLAR MIST who draws 6 ft.  We stayed a couple of nights and hiked one day up to Black Lake where we went swimming.  Great fun. 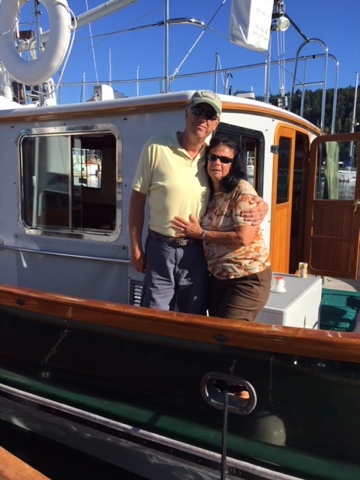 After a night visiting friends of Ken’s and Pat’s on their own island in the Gulf Islands, we spent our last night rafted together in Montague Harbour where it all began a month earlier.
Posted by LNVT Owners Association at 11:30 AM